Link to this page

Tahitian Landscape2
Order a Hand-Painted Reproduction of this Painting

Paul Gauguin was born in Paris, France to journalist Clovis Gauguin and half-Peruvian Aline Maria Chazal, the daughter of proto-socialist leader Flora Tristan. In 1851 the family left Paris for Peru, motivated by the political climate of the period. Clovis died on the voyage, leaving three-year old Paul, his mother and his sister to fend for themselves. They lived for four years in Lima, Peru with Paul's uncle and his family. The imagery of Peru would later influence Paul in his art.

At the age of seven, Paul and his family returned to France. They moved to Orléans, France to live with his grandfather. He soon learned French and excelled in his studies. At seventeen, Gauguin signed on as a pilot's assistant in the merchant marine to fulfill his required military service. Three years later, he joined the navy where he stayed for two years. In 1871, Gauguin returned to Paris where he secured a job as a stockbroker. In 1873, he married a Danish woman, Mette Sophie Gad. Over the next ten years, they would have five children.

Gauguin had been interested in art since his childhood. In his free time, he began painting. He also visited galleries frequently and purchased work by emerging artists. Gauguin formed a friendship with artist Camille Pissarro, who introduced him to various other artists. As he progressed in his art, Gauguin rented a studio, and showed paintings in Impressionist exhibitions held in 1881 and 1882. Over two summer vacations, he painted with Pissarro and occasionally Paul Cézanne.

By 1884 Gauguin had moved with his family to Copenhagen, where he pursued a business career as a stockbroker. Driven to paint full-time, he returned to Paris in 1885, leaving his family in Denmark. Without adequate subsistence, his wife (Mette Sophie Gadd) and their five children returned to her family. Gauguin outlived two of his children.

Like his friend Vincent Van Gogh, with whom in 1888 he spent nine weeks painting in Arles, Paul Gauguin experienced bouts of depression and at one time attempted suicide. Disappointed with Impressionism, he felt that traditional European painting had become too imitative and lacked symbolic depth. By contrast, the art of Africa and Asia seemed to him full of mystic symbolism and vigour. There was a vogue in Europe at the time for the art of other cultures, especially that of Japan (Japonisme). He was invited to participate in the 1889 exhibition organized by Les XX.

Under the influence of folk art and Japanese prints, Gauguin evolved towards Cloisonnism, a style given its name by the critic Édouard Dujardin in response to Emile Bernard's cloisonne enamelling technique. Gauguin was very appreciative of Bernard's art and of his daring with the employment of a style which suited Gauguin in his quest to express the essence of the objects in his art. In The Yellow Christ (1889), often cited as a quintessential Cloisonnist work, the image was reduced to areas of pure colour separated by heavy black outlines. In such works Gauguin paid little attention to classical perspective and boldly eliminated subtle gradations of colour, thereby dispensing with the two most characteristic principles of post-Renaissance painting. His painting later evolved towards Synthetism in which neither form nor colour predominate but each has an equal role.

In 1891, Gauguin, frustrated by lack of recognition at home and financially destitute, sailed to the tropics to escape European civilization and "everything that is artificial and conventional." (Before this he had made several attempts to find a tropical paradise where he could 'live on fish and fruit' and paint in his increasingly primitive style, including short stays in Martinique and as a labourer on the Panama Canal construction, however he was dismissed from his job after only two weeks). Living in Mataiea Village in Tahiti, he painted "Fatata te Miti" ("By the Sea"), "Ia Orana Maria" (Ave Maria) and other depictions of Tahitian life. He moved to Punaauia in 1897, where he created the masterpiece painting "Where Do We Come From" and then lived the rest of his life in the Marquesas Islands, returning to France only once, when he painted at Pont-Aven. His works of that period are full of quasi-religious symbolism and an exoticized view of the inhabitants of Polynesia. In Polynesia he sided with the native peoples, clashing often with the colonial authorities and with the Catholic Church. During this period he also wrote the book Avant et après (before and after), a fragmented collection of observations about life in Polynesia, memories from his life and comments on literature and paintings. In 1903, due to a problem with the church and the government, he was sentenced to three months in prison, and charged a fine. At that time he was being supported by the art dealer Ambroise Vollard. He died of syphilis before he could start the prison sentence. His body had been weakened by alcohol and a dissipated life. He was 54 years old. 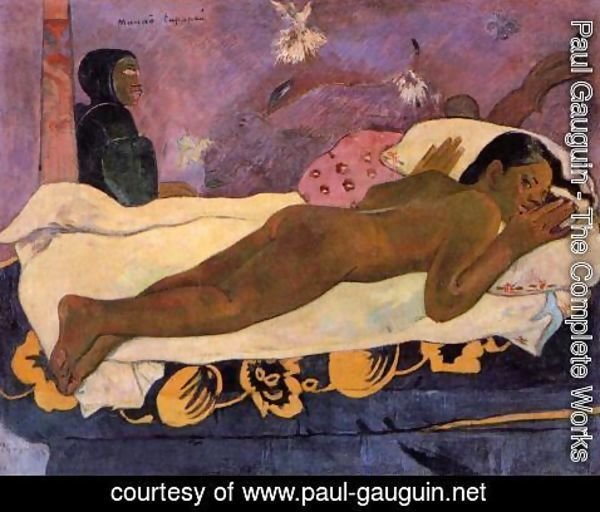 Primitivism was an art movement of late 19th century painting and sculpture; characterized by exaggerated body proportions, animal totems, geometric designs and stark contrasts. The first artist to systematically use these effects and achieve broad public success was Paul Gauguin. The European cultural elite discovering the art of Africa, Micronesia, and Native Americans for the first time were fascinated, intrigued and educated by the newness, wildness and the stark power embodied in the art of those faraway places. Gauguin like Pablo Picasso in the early days of the 20th century was inspired and motivated by the raw power and simplicity of the so-called Primitive art of those foreign cultures.

Gauguin is also considered a Post-Impressionist painter. His bold, colorful and design oriented paintings significantly influenced Modern art. Gauguin's influence on artists and movements in the early 20th century include Henri Matisse, Pablo Picasso, Georges Braque, André Derain, Fauvism, Cubism, and Orphism among others. John Rewald, one of the first art historians to focus on the birth of modern art, wrote about Post-Impressionism in his pioneering publication called Post-Impressionism: From Van Gogh to Gauguin (1956). Rewald considered it as a continuation of his earlier volume History of Impressionism (1946). In his book about the Post-Impressionists he limited the scope to the years between 1886 and 1892. Rewald mentioned that a "subsequent volume dedicated to the second half of the post-impressionist period" - Post-Impressionism: From Gauguin to Matisse - was to follow, extending the period covered to other artistic movements of the late 19th and early 20th centuries, unfortunately he did not complete that volume. An interesting essay by John Rewald entitled Paul Gauguin-Letters to Ambroise Vollard and André Fontainas, (included in John Rewald Studies in Post-Impressionism, published by Abrams in 1986), discusses Gauguin's years in Tahiti, and the struggles of his survival as seen through correspondence with the dealer Vollard and others.

The vogue for Gauguin's work started soon after his death. Many of his later paintings were acquired by the Russian collector Sergei Shchukin. A substantial part of his collection is displayed in the Pushkin Museum and the Hermitage. Gauguin paintings are rarely offered for sale; their price may be as high as $39.2 million US Dollars.

Gauguin influenced many other painters, but one especially notable connection is his imparting to Arthur Frank Mathews the use of an intense color palette. Mathews met Gauguin in the late 1890s while both were at the Academie Julian. Mathews took this influence in his founding of the California Arts and crafts or California Decorative movement.

The Japanese styled Gauguin Museum, opposite the Botanical Gardens of Papeari in Papeari, Tahiti, contains some exhibits, documents, photographs, reproductions and original sketches and block prints of Gauguin and Tahitians. In 2003, the Paul Gauguin Cultural Center opened in Atuona in the Marquesas Islands.

Paul Gauguin's life inspired Somerset Maugham to write The Moon and Sixpence. It is also the subject of at least two operas: Federico Elizalde's Paul Gauguin (1943), and Gauguin (a synthetic life) by Michael Smetanin and Alison Croggon. Déodat de Séverac wrote his Elegy for piano in memory of Gauguin. Mario Vargas Llosa has also based his 2003 novel The Way to Paradise on Gauguin's life.

Gauguin has been sainted by the Ecclesia Gnostica Catholica, a modern revival of Gnosticism. (From wikipedia)

Report an error on this page